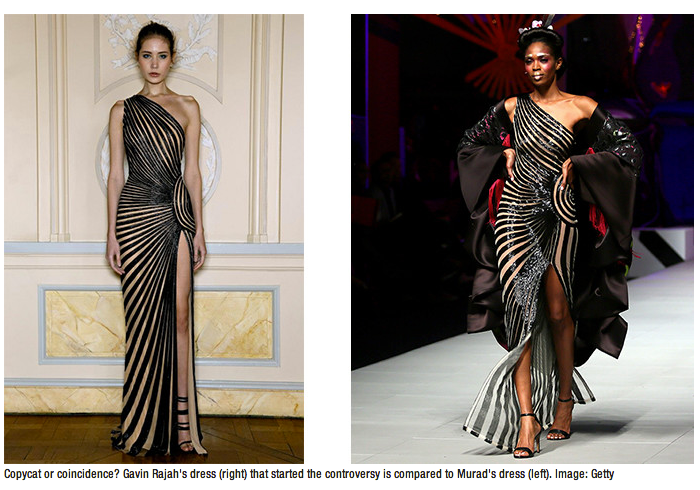 Feathers have been flying since the claim was made that one of Gavin Rajah’s gowns, shown at Mercedes-Benz Fashion Week in Cape Town last week, bore a striking resemblance to a design from Zuhair Murad’s Spring/Summer 2013 Ready-to-Wear collection. The accusation raised the important question: where do you draw the line between plagiarism and inspiration?

Independent fashion events producer Sim Tshabalala was the first to make the connection after scanning couture archives. Tshabalala posted an image comparing the two dresses on Facebook and Instagram with the status update: “There can’t be a fashion week without drama – who did it better lol – was this a colab design? – hell no.”

The post resulted in a virtual Twitter storm with people expressing their disappointment and questioning Rajah’s integrity.

Rajah subsequently sent Tshabalala a lawyer’s letter asking him to withdraw his statement. He responded to the accusations by inviting journalists to his studio to defend his dress and design process.

According to an online article by IOL Lifestyle, Rajah was able to produce sketches of the design process, a document detailing the inspiration behind the design and references to fans and the Japanese rising sun detail for the dress, he named “rising sun fan dress”. He added that he had never seen Murad’s dress.

“If I had seen that dress, I would never have put it into the collection because someone would see the association,” he said.

This is not the first time the Cape Town-based designer has been accused of plagiarism. According to The New Age, he was embroiled in another scandal last year, between himself and a company called Klein Karoo International.

Rajah claimed he had co-developed a special technique using ostrich leather fabric with the company. The organisation denied the claims saying Rajah had shown interest in their technique nine years ago. The fabric was used by Rajah to create a dress that went on to win the Design Indaba’s Most Beautiful Object award.

To prosecute someone and get the law enforced is very difficult. If you don’t have the lawyers, if you are small fry they will crush you in a matter of minutes

Local designer Arwen Swan of Arwen Garmentry says it is plausible that Rajah made a mistake with regards to the “fan dress”. “The only thing I can think of possibly in his favour is that he saw the design somewhere and it sat in his mind and he didn’t realise that it had been done. He didn’t do his research before the show. I’m hoping that’s what happened. I’m hoping it’s not a copy outright.”

Swan says the accusations do nothing to help South African designers’ notorious reputation as copy artists and reflects badly on designers like herself who try to be original.

Having her own designs copied by other top local designers, fly-by-night labels and Matric dance dress seamstresses is something Swan is all too familiar with. However, she adds that there really aren’t any copyright rights or recourse for local designers.“Overseas [designers] are much better protected,” she says.

Swan recalls an incident when her lawyers sent a legal letter to a designer that had copied her trademark corset pattern outright, only to be told that she could be sued for slander. Now, for Swan the imitators only spur her on to improve her patterns and designs. “You use it to make your product better.”

For up-and-coming designer Gareth Cowden of Babtunde Clothing it all comes down to money and people’s “no skaam” attitude. Cowden has had his African-inspired accessories copied by top local designers, big retailers and even international brands. He’s even had local designers shamelessly ask him to produce his products with their own labelling on them.

Although he has a trademark on the Babtunde name, Cowden has found that copyrighting his idea of producing accessories using African wax fabrics have proved to be very difficult and not worth the expense. “To prosecute someone and get the law enforced is very difficult. If you don’t have the lawyers, if you are small fry they will crush you in a matter of minutes because you can’t afford the lengthy process,” he explains.

Part of the problem is the integrity of manufacturers. In an effort to do business and keep their doors open, many of Cowden’s suppliers have provided his personal designs and fabrics without his consent to larger retailers and designers with financial sway. “If people don’t understand the challenges of working locally, what is the point? If someone small doesn’t copy me then someone big is going to copy me and completely shut me out,” he says. Despite confronting one of his suppliers who denied stealing his designs, Cowden was forced to return to the vendor due to the lack of competition and quality manufacturers.

He agrees there is a fine line between inspiration and copying, and although some cases of imitation of his work are not malicious Cowden says it remains a huge problem in the SA fashion industry. “It’s just a lack of knowledge and a lack of respect.” Designer’s also take advantage of consumers who don’t know any better.

One of the most ironic things is how the Internet and social media ensure copycats get caught out much quicker, but at the same time both are instrumental in the widespread theft of ideas.
Source: Destiny Connect 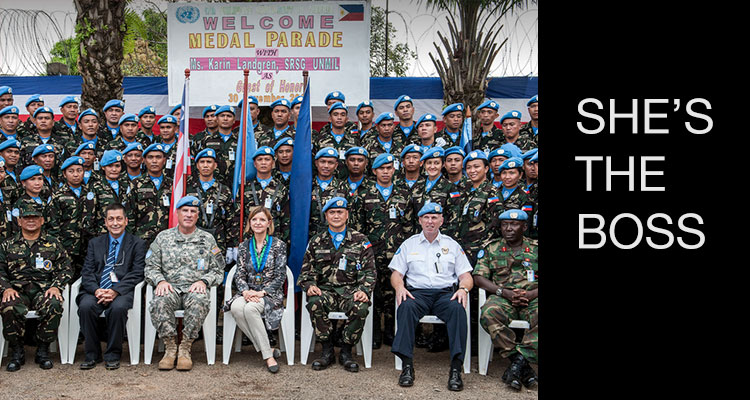